Offences Against One's Self: Paederasty 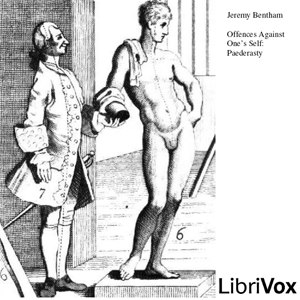 Offences Against One's Self: Paederasty

Jeremy Bentham (1748-1832) was an English jurist, philosopher, and legal and social reformer. He was a political radical and a leading theorist in Anglo-American philosophy of law. He is best known as an early advocate of utilitarianism and animal rights who influenced the development of liberalism.

The essay Offences Against One's Self (c. 1785), argued for the liberalisation of laws prohibiting homosexuality. The essay remained unpublished during Bentham's lifetime for fear of offending public morality. It was finally published for the first time in 1931. (Wikipedia)

This recording was catalogued on 28th July 2007, the 40th anniversary of the coming into force in the UK of the Sexual Offences Act 1967, which decriminalised male homosexuality for the first time (though with restrictions).

For further information, including links to online text, reader information, RSS feeds, CD cover or other formats (if available), please go to the LibriVox catalog page for this recording. Download M4B (49MB)